University, the voices of the Luiss webinar: now a plan for Africa 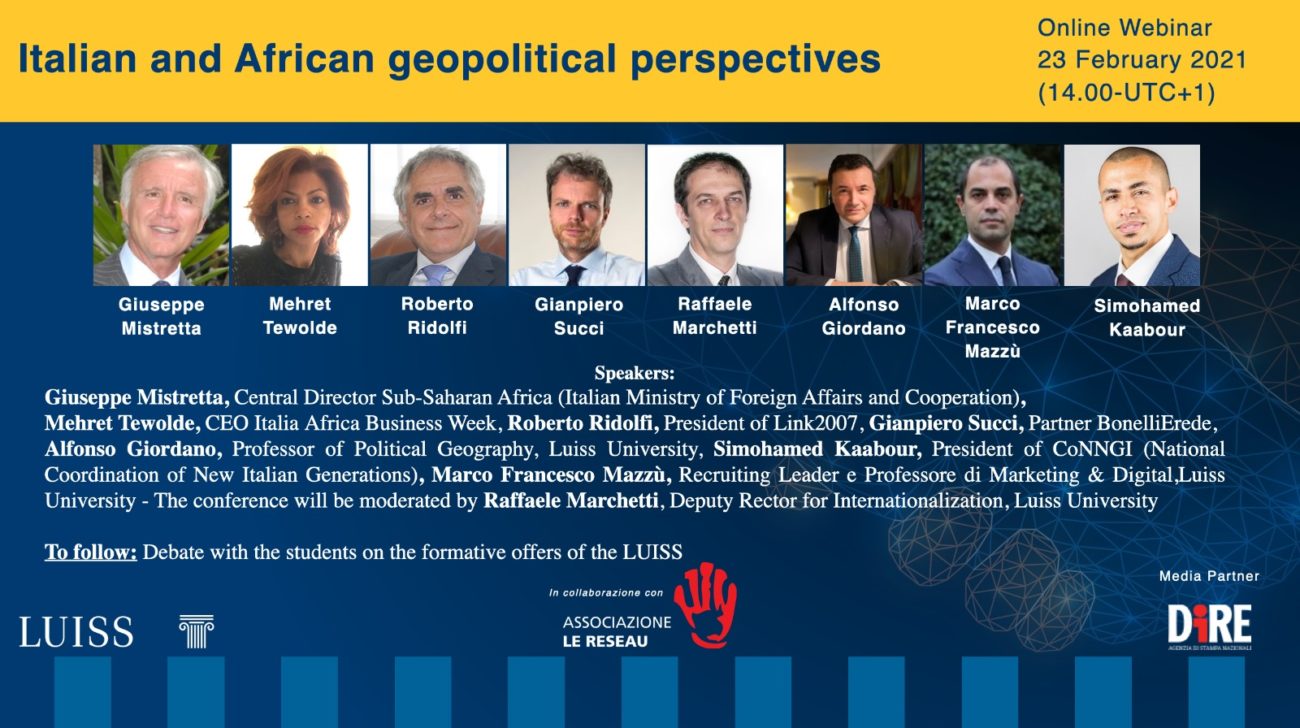 ROME – There is a plan for Africa that is worth it. It passes through its youth, is not imposed from above and is the result of listening. Proposing it today are students and professors from various countries on the continent in dialogue with Luiss University faculty and representatives of civil society, guests of the Diaspora Program.

The occasion is the second webinar in the University’s series, which kicked off at the end of January. It begins with a minute’s silence in memory of Ambassador Luca Attanasio, policeman Vittorio Iacovacci and driver Mustapha Milambo, who were killed yesterday in an ambush in the eastern part of the Democratic Republic of Congo. Raffaele Marchetti, Deputy Rector for Internationalization Luiss University, spoke of “a difficult meeting” due to those “tragic events”, inviting people to “hold it with passion”, as a tribute to those who have dedicated their lives to Africa. “Luca Attanasio would be happy to know about this webinar of ours,” reiterates Giuseppe Mistretta, former ambassador from Angola to Ethiopia, now Foreign Affairs Ministry central director for Sub-Saharan Africa. His remembrance of his colleague sets the scene for the choice by Luiss and the Le Reseau association partners to listen to the voices of the continent right away.

Here, then, in video links from Senegal and Kenya, Morocco and Cameroon, are wide ranging reflections on the university as a decisive hub in terms of knowledge sharing and, therefore, cooperation and development. Listening to Jean Thierry Somda, professor at the Institut Africain de Management (IAM) in Ouagadougou, Burkina Faso: “It is necessary to create partnerships for training, with a focus on applied techniques and practical skills, getting rid of stereotypes that penalize relationships between different countries and contexts.” And again: “In Burkina Faso Italy is seen as a caricature, limited to spaghetti and football teams, while the rest is unknown; it’s a pity because your country is a leader, for example, in the agri-food sector and has much to offer in terms of innovation, training technicians, engineers or legal experts.”

Next up are the students. According to Koné Fanta, who attends the University of Bambey in Senegal, “European and Italian universities should focus on the empowerment of African women, supporting them in a process of self-esteem and opportunity”. Paulin Ouedraogo, on the other hand, speaks from Burkina Faso and asks how bureaucratic problems can be overcome and how students wishing to undertake international studies in Italy can be helped. Abdelmajid Souleyman Houno, a graduate student in Thies, Senegal, also looks towards Italy. He offers his condolences for Attanasio and Iavocacci, “who were doing something important” and then speaks of the climate, of a drought that, according to international estimates, threatens 45 million people in Africa and the need to train technical personnel in the use of natural, non-polluting energy sources.

Luiss experts then weigh in. Alfonso Giordano, professor of Political Geography, talks about migration and demography. He underlines that “children and young people are the key” and that Italian investment is necessarily “also in its own interest, useful for them and for us”.

The key words of Marco Francesco Mazzù, recruiting leader and Professor of Marketing & Digital at Luiss, are “diversity management“. “Diversity and inclusion are important keys to success in both the public and private sectors”, he says. He adds that “inclusive companies founded on ‘diversity’ consistently outperform their competitors”. In his dialogue with students, touching on the theme of relations with Africa and the Afro-Italian diasporas, Mazzù emphasizes that “people show a positive attitude towards organizations committed to a culture of diversity and social inclusion“. According to the professor, “processes of ‘social listening’ towards internal players in business processes increase the culture of inclusion”.

The need to “listen” is addressed by Mehret Tewolde, CEO of Italy Africa Business Week (IABW), a well-established event that that is in a network with diasporas, conceived as bridges capable of bringing people closer, That of the CEO is also an appeal that is food for thought: “The university can act as an ‘audit’ for politics and the world of cooperation, monitoring what is actually being done to move towards gender equality and all the Development Goals of the 2030 Agenda”, says Tewolde. She continues: “We need to contribute to interpretive models that are tools for the fair development of society and to build models of thinking and business organization that break down stereotypes.”

UNIVERSITY. MISTRETTA (FOREIGN AFFAIRS MINISTRY): LET THERE BE A PLAN FOR AFRICA

More than a Marshall Plan for Africa, what is needed is “a major plan for education” university and professional, as stated today by Giuseppe Mistretta, Foreign Affairs Ministry central director for Sub-Saharan Africa, speaking at a webinar organized by Luiss University.

The meeting, the second in Diaspora Program series, dedicated to relations between Italy and Africa, was opened by a minute of silence in memory of Ambassador Luca Attanasio and the other victims of the ambush that occurred yesterday in the east of the Democratic Republic of Congo.

“In Africa, every year there are 30 million newborn children that sustain the demographic trend and accordingly every year at least 15 million young people should find gainful employment,” said Mistretta at the outset. He went on to remark that “today, instead, the continent provides work for only between three and four million: the gap to be bridged is enormous”.

According to the director, the gap contributes to fuel situations of crisis and conflict, highlighted by episodes such as yesterday’s ambush in Congo: “It is necessary to provide jobs – emphasizes Mistretta – also to avoid poverty, marginalization and violence.”

According to Mistretta, “growth that provides employment for 10 or 15 million Africans per year is equivalent to 7% of the continent’s overall GDP”. The diplomat’s view is that Italy “does quite a bit”, not only and not so much because of the scholarships funded by the Foreign Affairs Ministry but also because of the additional contribution offered by private parties and foundations linked to business entities, such as Enel, E4impact or ENI, which offer training processes.

Mistretta concluded with an appeal. “We must also look at what China is doing“, the director said. “According to the data of the last FOCAC conference, every year Beijing gives up to 50,000 scholarships, plus a range of other activities: Europe is right to focus on programs such as Erasmus Mundi but must achieve more synergy with all private initiatives.”

The culture of diversity and social inclusion are oxygen for the economy. And they reward companies that promote them in practice, creating a positive sentiment among workers and ensuring higher performance, up to 12 percent. Dynamics and data highlighted today by Marco Francesco Mazzù, recruiting leader and Professor of Marketing & Digital at Luiss University.

The occasion was the second meeting of the Diaspora Program launched by the University last month. The proceedings, on the theme of “Italian and African Geopolitical Perspectives”, were marked by a discussion between Luiss faculty and young students of African origin, both resident in Italy and in countries on the continent. “Luiss intends to make the most of the exchange by ensuring that international students are the protagonist of their own choices”, Mazzù said. “Their needs must contribute to devising  an academic offering that is fully up to the challenges of the globalization of talent and work.”

The professor looks at the relationship between education and finding a job through the prism of a multicultural vision. The key words suggested, with quotes from reports published between 2016 and 2020 by the consulting firm McKinsey, as part of a study of a thousand organizations in 15 countries, are “diversity management”. According to Mazzù, “diversity and inclusion are important keys to success in both the public and private sectors”. As McKinsey’s analysis confirms, “inclusive and diversity-based companies consistently outperform other companies that pay less attention to diversity and inclusiveness”.

In his dialogue with the students, touching on the theme of relations with Africa and the Afro-Italian diasporas, Mazzù stressed that “people show a positive attitude towards organizations committed to a culture of diversity and social inclusion”. While companies and organizations often aim for a balance of genders and community affiliations, however, “in executive teams, fairness is still a long way off”. An obstacle, one of “under-representation”, which could also affect the quality and effectiveness of the products and services offered.

At the forefront of today’s debate, animated by young people from a variety of countries, Mali, Senegal, Morocco, Kenya and Burkina Faso, along with Mazzù and Susanna Owusu Twumwah, former communications director of the National Summit of Diasporas, were key cross-border themes: from the circular migration of students, with benefits also for the countries of origin where skills acquired abroad are invested, to the opportunities afforded by ecological transition and the green revolution; from the promises of new technologies, big data and artificial intelligence to healthcare as a global public good. 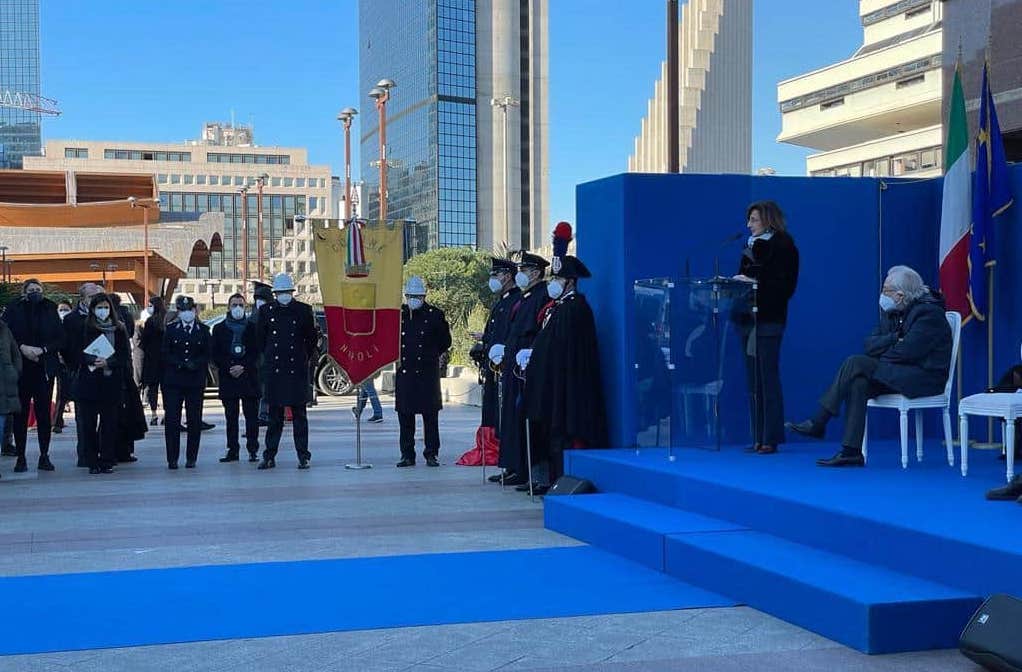 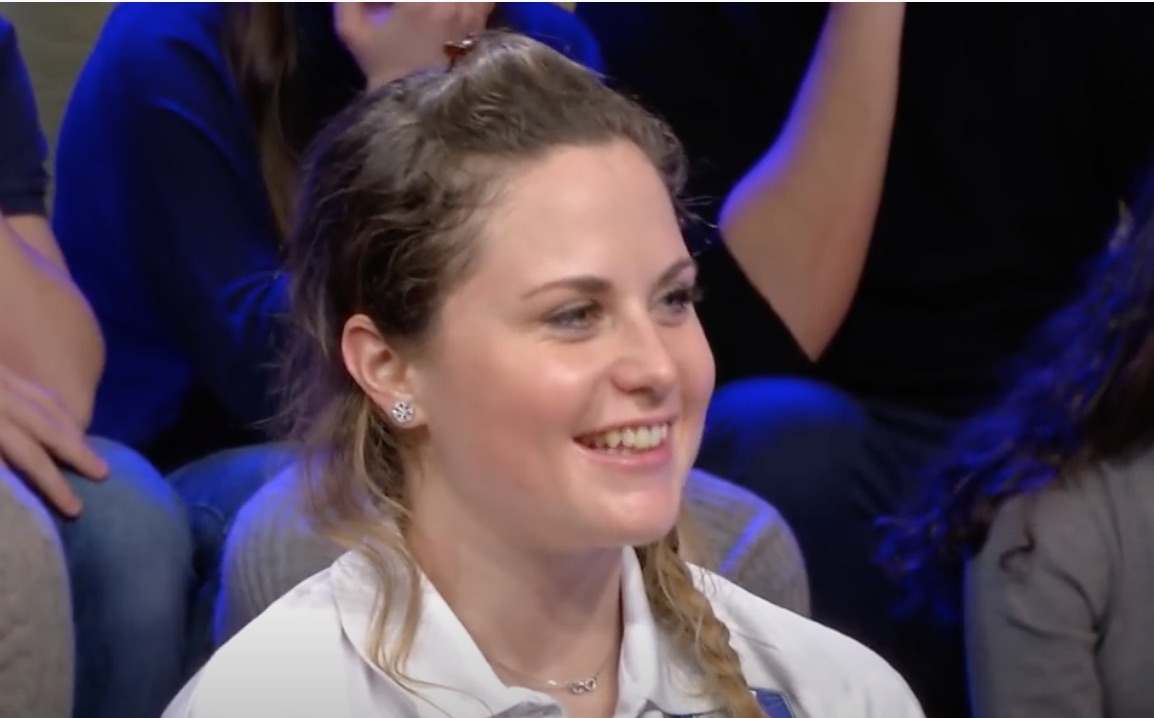 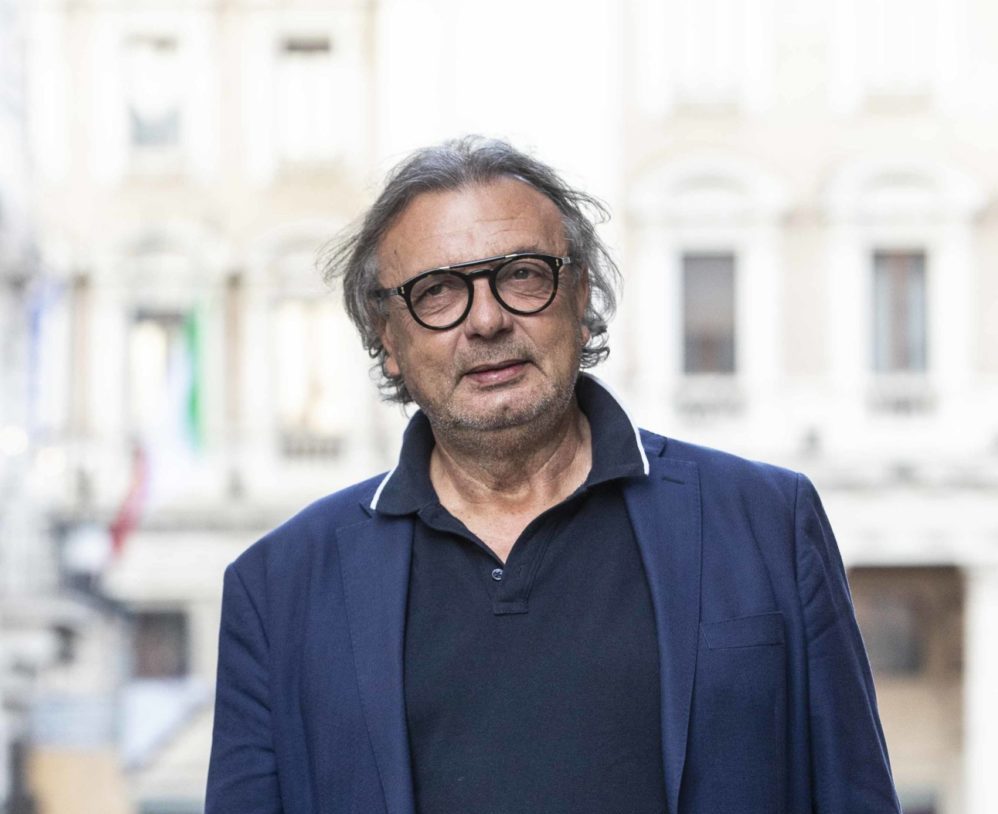 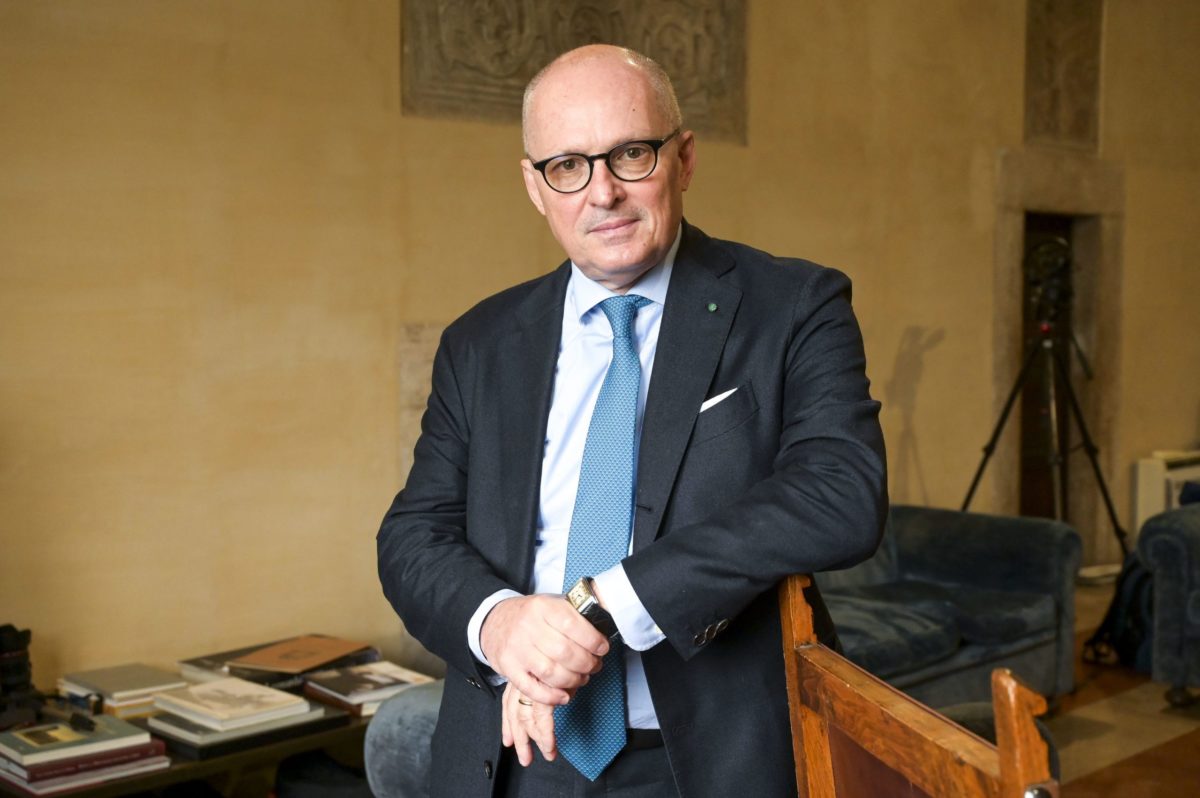 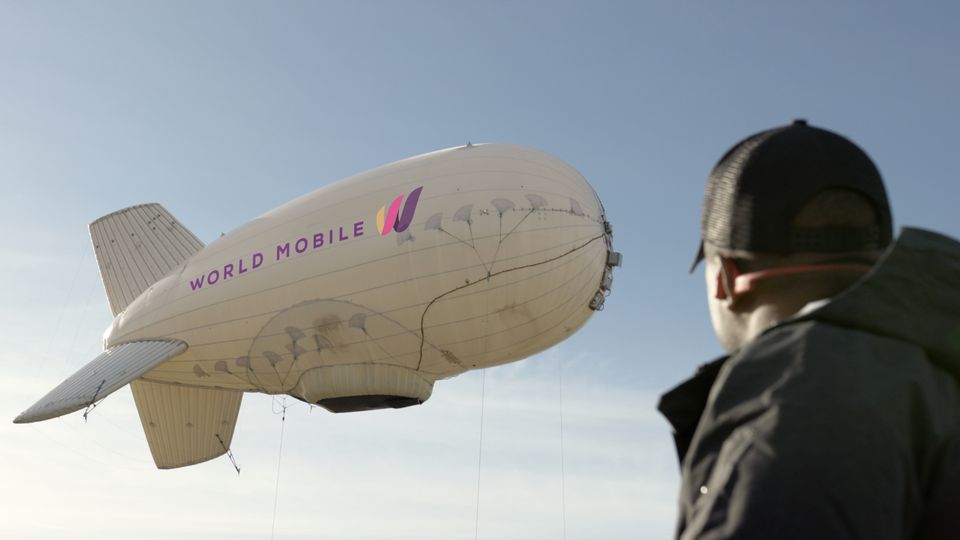 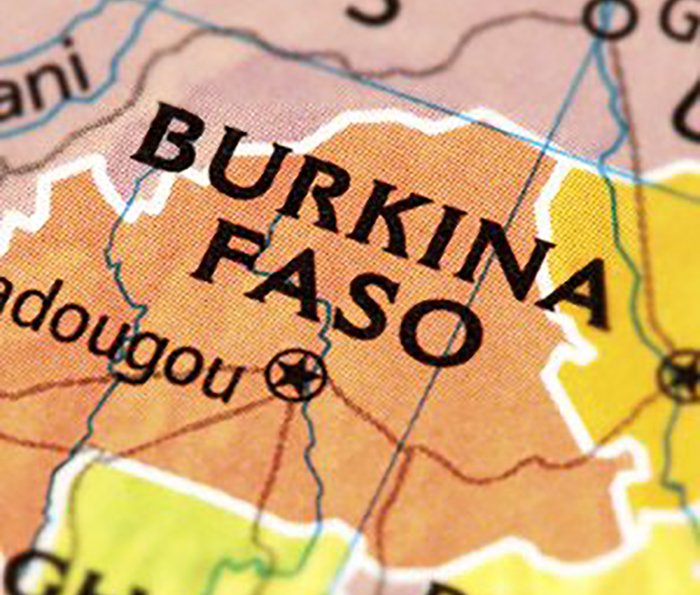 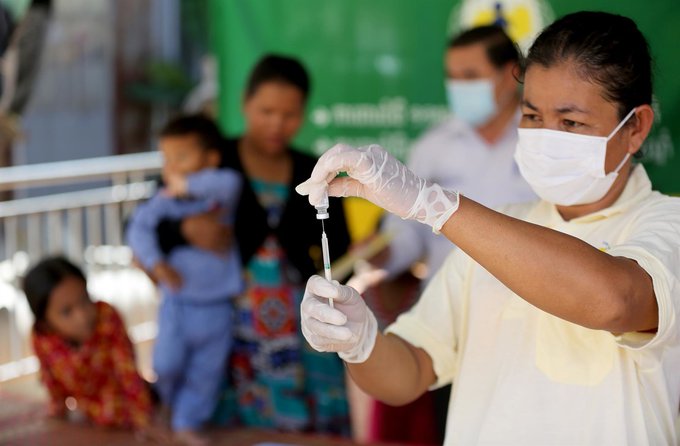 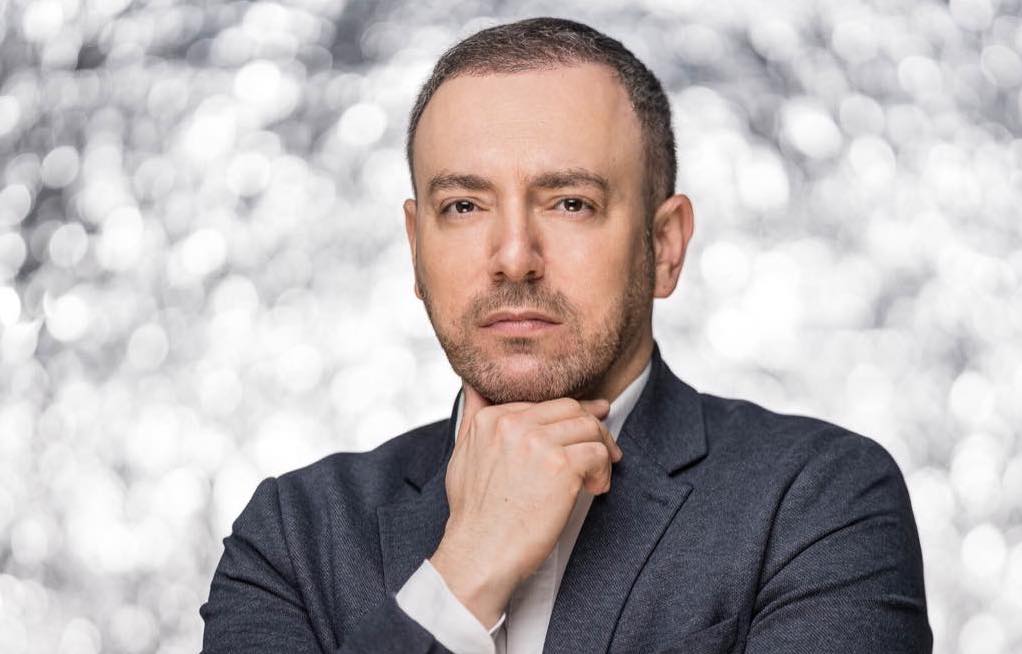 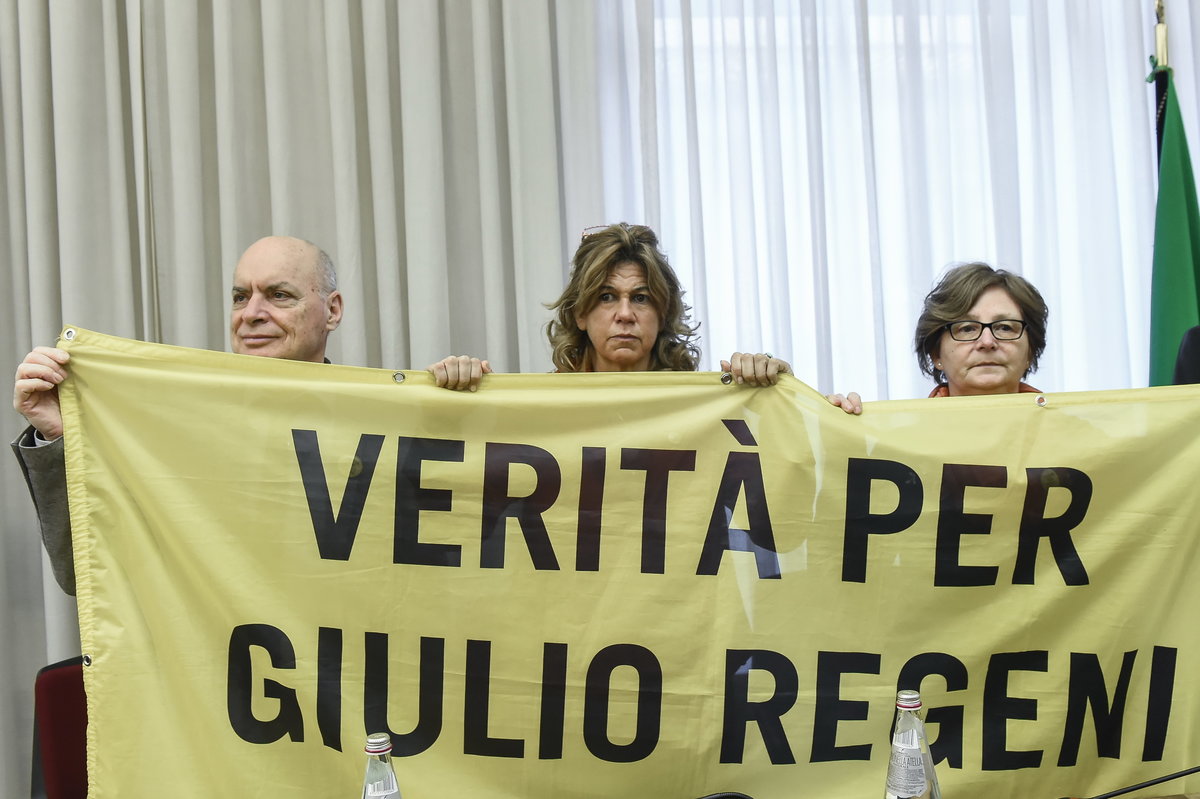 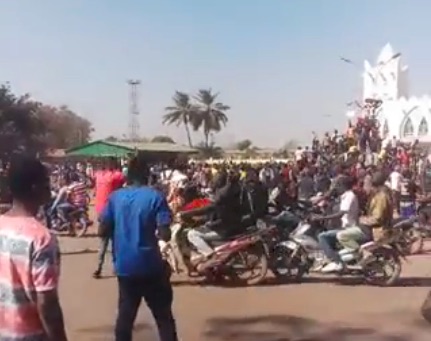